On writing and photography...

I haven't really been using this blog.  Most of the time I think it's a waste because it's geared towards written words not visuals, and for that I prefer Instagram or Facebook.  However, lately I've been thinking otherwise.

I'm not a very good writer, which is probably why I prefer drawing, but something is missing. In December I did an interview for Grand Magazine with the lovely Barbara Aggerholm followed by a photo session with the talented Dwight Storing.  The interview went on much longer than I anticipated, and the questions took a different direction than I was expecting.  What I was prepared to talk about was the ideas behind my work, a more detailed breakdown of how I created each image (both process and subject).  However Barbara was more interested in writing a story about me, my life, and how my life experience has shaped my work.  I understand, Grand Magazine is about people.  But I was left wanting more.

I have not yet read the article, it won't be out until the March/April issue.  But I have decided that this year I am going to try to include more regular posts about what I am working on, but more importantly why.  I'm not sure where these thoughts are going, but these are the ideas I am playing with.

Last night I attended Flash, a local contemporary photography showcase.   I saw some of the most powerful images I have ever seen by an amazing photographer Larry Towell.  Listening to him talk about why and how he creates the work he does really resonated with me.  He lives a simple life on a rural farm near Chatham, Ontario with his family, but he regularly goes on world-wide adventures documenting some of the greatest human conflicts and crises on earth.  Now photojournalism is a profession that I greatly admire (it's essential); but travelling to war zones and immersing myself in the middle of heated uprisings is the last thing I would ever want to do (I can't even stand crowds at the farmers market).  Several of his images really affected me.  Primarily the documentation of First Nations and Inuit housing and community life in Canada, juxtaposed against his own home life.  The similarities and differences were profound.

Photos Larry took in Attawapiskat of housing, children playing, people inside their homes.  I was especially taken by photos inside tiny homes with entire families watching television, photos of rooms full of kids playing video games, kids hanging around on rural street corners - contrasted against photos of children fishing on the ice, playing in the fields with their dogs.

I wondered, "what is it like to live there?"  How are these homes similar and how are they different from what I know? Are these people happy? What is truly important to a house, what makes it a home?  What do these places need?  What do we think they need that they really don't need?

Do these families have the same parenting problems that I have (limited screen time, encouraging outdoor play, getting kids to clean up their own messes)? 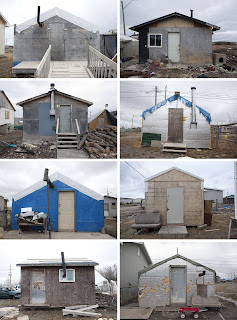 https://thewalrus.ca/in-attawapiskat/
(there were many more photos in Larry's slide shows that I can't find online)

Larry continued to show photos of people around the world, in make-shift housing, temporary housing, living in bombed out shells of former homes.  Most of these I found incredibly distressing, for a variety of reasons.

I found this photo by Larry Towell particularly intriguing (I'm not sure where or when it was taken): 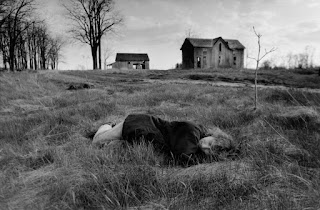 What is going on here?  What is she thinking about?

The photo reminded me of a painting I forgot about long ago, but I loved when I was a kid. 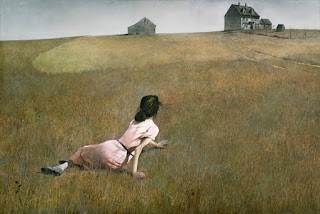 Christina's World is a 1948 painting by American painter Andrew Wyeth
from: https://en.wikipedia.org/wiki/Christina's_World

Both images depict a girl in the grass, with farmhouses in the distance.  However Andrew Wyeth's has an optimistic feel, the girl is looking longingly towards the well-kept houses.  In Larry's photo the houses have fallen apart and the girl is looking away (or is she sleeping?).  These images are both loaded with emotion and story, they spark the imagination.

After Larry's presentation last night I looked at his Instagram feed.  One photo in particular caught my attention, both for the image depicted (the beautiful use of the a variety of wood species collected from his own farm) but even more so after I read the caption beneath it. 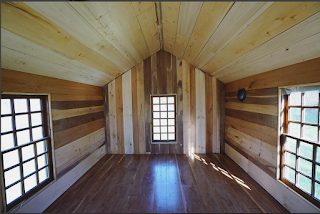 "Thoughts on being Canadian on the day of the U.S. elections.
We Canadians like living in the bush, so since this spring, I’ve been building a cabin out of salvaged materials at the back of my farm to get away from the invasiveness of the internet, the madness of this particular election campaign, and to maintain some kind of contact with myself and with nature. I just finished paneling the walls with scrap, walnut, oak, cherry, pine, and cottonwood boards sawn in my local mill from trees I cut off the farm. I went back today, as the election results began to roll in, to take this picture. I realized I’m going to need a table, a chair, and a bed soon, because no matter what happens, it’s going to be a long four years. Tomorrow I leave for the Standing Rock Sioux protest camp in North Dakota. Regardless of who gets in, the results of this campaign will not affect oil profits. No wonder the original Americans don’t bother to vote. As for me, I owe my career as a Canadian, to all the presidents of the United States since Ronald Reagan, who have continued to create turmoil, havoc, wars, and hatred around the globe. Tonight therefore, is a good occasion to get out my bed roll and christen the cabin, in order to listen to mother nature--- or what’s left of it.
Larry Towell
8/11/2016"

People have been living in Canada for thousands of years in homes created from materials gathered from the land, producing no waste, and being 100% renewable/sustainable.  What have we lost?  What have we gained?
Larry's book "The World From My Front Porch" is about "land, landlessness, peoples association with the land, and how the land makes you who you are".  This is the essence of what I am interested in.

Posted by Michelle Purchase at 11:01 AM

Michelle Purchase
I am a visual artist / printmaker based in Kitchener, Ontario, Canada. I use this space to post announcements for upcoming shows, new work, and occasional inspiring oddities. CONTACT: mpurchase@gmail.com